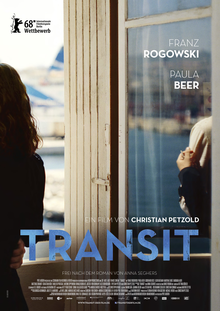 All of our events are open to the public.
We welcome members and non-members alike.
This movie is loosely based on the book by Anna Seghers (1900-1983) with the same title. Seghers’ book is set in 1942 France after the German invasion and was first published in 1944. The protagonist, Georg, is a German political refugee who escaped a German internment camp and fled to Paris. When German troops invade France, he is forced to move on to the still unoccupied city of Marseille in the South of France. In Paris he had unintentionally acquired a transcript, two letters, and a visa to Mexico of the German writer Weidel who had committed suicide. Arriving in Marseille he assumes the identity of Weidel when he visits the Mexican embassy and applies for a transit visa in the American consulate. Waiting for his papers he meets Marie, the wife of the deceased writer who is desperately looking for her husband. She had left him in Paris and is unaware of what happened to him. When Georg falls in love with her, he is faced with some difficult questions - should he tell her the truth about her husband? Will he be able to convince her to leave with him when she is still committed to her husband? Will he board the ship by himself if she is unwilling to do so after she has been told that her “husband” has been visiting the Mexican and American consulate and seems to be in town? The ending of the movie may subvert your expectations with its haunting ambiguity. GERMAN WITH GERMAN SUBTITLES
All of our events are open to the public.
We welcome members and non-members alike.