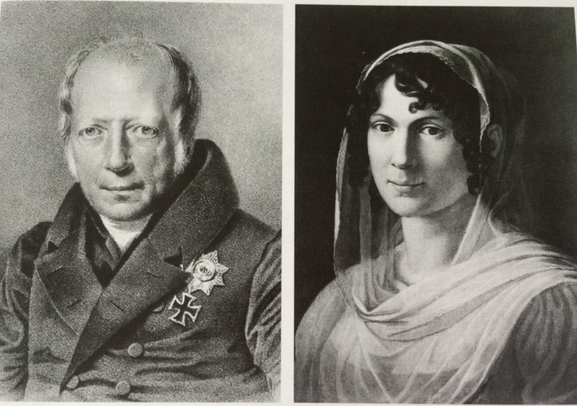 All of our events are open to the public.
We welcome members and non-members alike.
Our next meeting will take place on Wednesday, October 9,  6 - 9 PM in the Ratskeller at the German Society. We will talk about The Other Humboldts – Wilhelm and Caroline. After celebrating the accomplishments of Alexander von Humboldt, it seems to be only fair to remember his famous brother Wilhelm, who at the age of forty had already started to become a legend as a scholar, as a humanist, and a statesman. It is no coincidence that monuments of both Alexander and Wilhelm pose as "sentinels" at the huge iron gate entrance to the University that carries their name and was founded by Wilhelm in 1810, one of them standing for science, the other for the humanities. The address is the finest - "Unter den Linden" in Berlin, not far from the reconstructed City Castle. When we talk about Alexander, women are almost never mentioned. This is different with Wilhelm. He acquired celebrity status early on because of his extraordinary marriage with a woman whom he deemed “wahlverwandt und ebenbuertig”, a partner of equal intellectual and spiritual standing, Caroline von Dacheroeden. Together (and apart) they lived a cosmopolitan life in the most vibrant places of Europe, starting in Jena and Weimar, then Berlin, Paris, Rome, Vienna, Prague, and London, plus travel in Spain. They met the elites everywhere, collected art work and supported artists while Wilhelm worked his way up as a servant of the Prussian state, all against the backdrop of profound historical and social change. This was after the time of the American and the French revolutions and the Napoleonic wars. As always – all are invited, all are welcome. Refreshments will be served. So join us on Wednesday, the 9th of October!
All of our events are open to the public.
We welcome members and non-members alike.