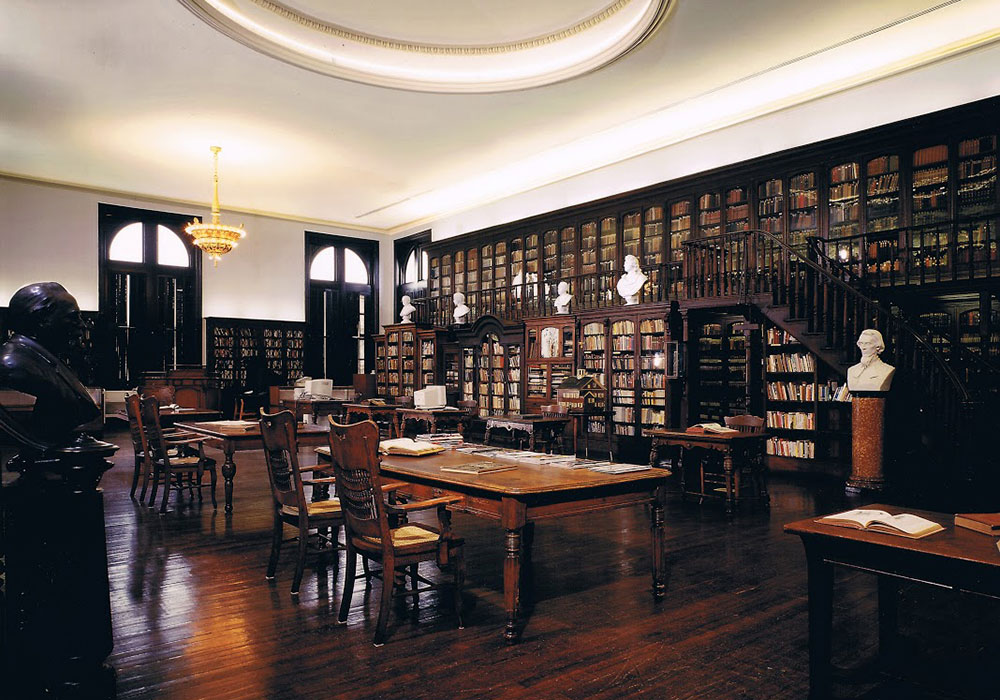 All of our events are open to the public.
We welcome members and non-members alike.
Explore the long relationship shared by the German Society of Pennsylvania and the University of Pennsylvania on this tour, which is led by a leading scholar of German-American history and a former German Society Library Committee Chair. Some precious Library objects to be studied on this tour include documents related to the founding of the archive by Penn German Department Professor Oswald Seidensticker, and the three historic Saur bibles that Seidensticker acquired in 1867 from the famous Pennsylvania book collector Abraham Cassell. The tour will also highlight Seidensticker’s scholarly works on Pennsylvania, as well as his published history of the German Society; the life of Penn professor Marion Dexter Learned and his Americana Germanica, as well as Learned’s magnificent first biography of Francis Daniel Pastorius. The tour will trace the continued relationship of the German Society and the University through the twentieth and twenty-first centuries. Don’t miss this opportunity to explore the history of the German Society with a tour guide who has been immersed in many aspects of the organization’s development for more than half a century! Library Treasure Tours are offered in English, and no knowledge of the German language is required to participate. Tickets are limited for this hands-on, interactive event, so please register early. The tour will be offered again at a later date. Please email info@germansociety.org with questions. About the Presenter: Frank Trommler, Professor of German at the University of Pennsylvania since 1970, emeritus since 2007, has been member of the German Society since 1978 when he served at the Library Committee with Russell Spruance and Harry Pfund, Professor of German at Haverford College. After having discovered the amazing treasures of the Horner Library in 1975 for an article on German-American poetry, Trommler engaged in collaborating with George Beichl , the GSP President, in preparing the Tricentennial of German immigration in 1983 where he organized the Tricentenial Conference of German-American History, Politics and Culture at the University of Pennsylvnia. This collaboration led to his active commitment to rescuing the Library in a comprehensive foundation-sponsored rehabilitation and cataloguing project in the 1990s for which Penn’s Research Administration provided important support. In the course of this five-year project Trommler learned of several previous collaborative projects between the German Society and Penn. They go back to the late eighteen century when both institutions engaged in furthering the course of German in Philadelphia. In his treasure tour Trommler will point to crucial points of contact and their reflection in books and rare documents of the Horner Library and its archive. Proof of vaccination is required. Please bring your vaccination card (or a clear photo of it) and a valid ID. Once inside, masks are not required to be worn.