Art at the German Society

The Arts Committee of the German Society is charged with identifying, maintaining and restoring the art objects that comprise the Society’s collection. All art objects at GSP are ranked as to the need for cleaning, restoration, preservation and tender loving care. Among the items most in need is this fabric union banner of the Brewery Firemen who tended the brewery boilers of Philadelphia. The firemen were almost entirely Germans, and from 1886 to 1903 the union’s convention and publications were in German. The first lager beer was brewed blocks away from the GSP in the Northern Liberties. At its peak before Prohibition, Philadelphia was home to 700 breweries. Our lovely banner is another link to our past in Philadelphia.

A link to our history...

When you visit our Auditorium, you will see  a painting by Bass Otis of Peter Ozeas above the stage on the left. Mr. Ozeas served five terms as a German Society Director between 1784 and 1794 and as Vice President in 1808, the year this portrait was painted. Bass Otis was a well known portraitist of the early 19th century who had studied in Boston with Gilbert Stuart and in New York before starting his Philadelphia studio in 1812, also the year he was elected to the Society of Artists of the United States. Nine of his paintings hung at Pennsylvania Academy of Fine Arts. He is credited with producing the first American lithograph, and also patented the perspective protractor. 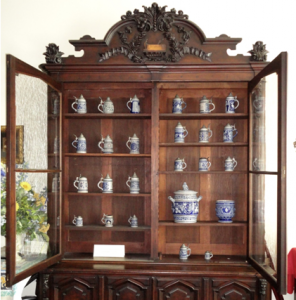 A unique collection of distinctive Westerwald stoneware from the Reichenbach collection - always on display in our Director’s room.